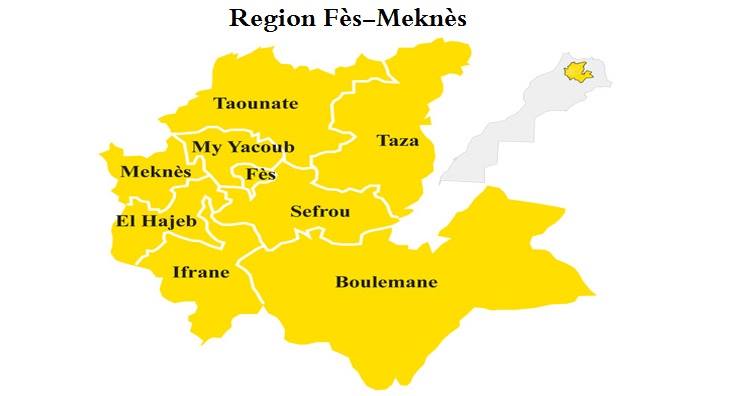 FES-MEKNES
BACKGROUND/FACTS:
– About 4,3 million in population over an area of 39,000 km² (10% of the country’s area) with 39% rural villages. Languages spoken: Arabic & Berber.
– Strategic location in the mid-north with continental climate (snows in certain places e.g. Ifran)
– Fes was built in 808 A.D. & used to be Morocco’s capital until 1912. It was the destination of Muslims after withdrawing from Andalus. Jews had also their own quarter (Mellah) in the city.
– The University of al-Qarawiyyin located in Fes is the oldest continually operating university world-wide. It was founded by Fatima Al-Fihri in 859 A.D. and many Christian & Jewish philosophers graduated from it. Famous Islamic schools are also founded in Fes where leaders in Islamic Salafi movements have graduated.
– Fes is the religious capital of the country. Pilgrims from different African countries (Mali, Senegal, Chad, Algeria…) visit numerous shrines & tombs, spending overnight prayers and other religious activities (specially Tijani Soufi ways)
– Spiritual music festival takes place yearly in Fes with worldwide participants.
– Ben-Hamdoush shrine, 15 km from Meknes, is a special destination for homosexuals during a special season believing in Lalla Aicha’s legend; an old woman who turned into a man when a burglar attacked her in her privacy!!
– Main cities in this region: Fes (4th biggest in Morocco), Meknes, Safrou, Ifrane, Taza, Taounate, El-Hajeb, Boulemane & Moulay Yacoub.

SPIRITUAL ATMOSPHERE/ Prayers:
– Pray against the spirit of religiosity specially tijanis & soufis.
– Pray against the homosexual activity & legends in Ben Hamdoush shrine.
– We repent as Moroccans & children of God for all covenants with evil spirits done by our ancestors in this region.
– Pray for the existing home churches. May the Lord enlarge the territories!
– Pray for Christian musicians & singers to push their way in the spiritual music festival.
– May Christian tourists be salt & light for this region.
– Pray that the cultural diversity helps people be more open & accepting for others.